The topic of early sport specialization is pretty big right now. It seems like more and more kids are picking one sport to spend their entire youth and adolescent stage focusing on. Some parents and authority figures are feeding the idea to kids that if you want to be really good at a certain sport and play that sport in college, you need to solely focus on that sport and nothing us. Kids buy into this notion because at a surface level it makes sense, and they want to play college and professional ball, but there is much more that goes on with skill and athletic development when talking early sport specialization.

The Theory Of Early Sports Specialization

The theory behind early sports specialization is that if you spend more time playing one sport the better you will be at that given sport. It’s like the “10,000 hour rule” or the “10-year rule” in chess. It is said that it takes about 10,000 hours worth of practice to perfect a skill, and in chess about 10 years to be considered an expert. With this theory in mind, it makes sense that if a 12-year old wants to play professional baseball, he should start now by devoting all of his time focusing on baseball and developing baseball specific skills. The more time spent working on specific skills results in improvement in those skills.

The goal with early sports specialization is for an athlete to optimize their development in a certain sport. All other sports are dropped to focus on the most important and most liked sport to increase their chances of being the best. Athletes specialize in one sport in hopes they will have the opportunity for a college scholarship and potentially play professionally.

Competing in multiple sports is thought that it will decrease the athlete’s development in the sport they have the highest chance of excelling in. They will lose time to develop skills specific to that sport and in turn not reach their potential in that sport because they have essentially “wasted” their time competing in other sports. The thought is, “why play checkers if you only want to get good at chess?”

In my personal experience the sports I see early specialization in is sports such as baseball, basketball, soccer, and other sports that are very skill oriented. I believe these sports get the wrap that you simply have to be more skillful in order to perform better at that given sport, therefore you need to specialize early on. Whereas sports like football there isn’t thought to be as much skilled required so you don’t need to spend as much time developing football specific skills. I believe it’s thought that “football you just need to be tough to be better,” whereas in basketball you need to be a better shooter, dribbler, passer, defender, etc. to be better. Not many people tell a basketball player to be “tougher.” I think this is why you see a lot of football players that compete in multiple sports.

While it is true that the more time you spend working on specific skills the better you will get at those skills, more is required of an athlete than just being skillful. Next I will explain why perhaps playing checkers could make you better at chess.

What Is Wrong With Early Sports Specialization

One of the problems with kids specializing in sport at an early age can be overuse that comes with the sport. Now, problems with overuse won’t occur in all athletes that decide to specialize early on, but there are certain risks that can be caused with overuse. Overuse could simply be described as using too much of one movement pattern or one part of the body. This only becomes a problem if the athlete doesn’t have the strength or coordination to combat the overused movement pattern. Lets take for an example a pitcher that decides to only play baseball when he is 12 years old. He may be a really good pitcher and therefore throws a lot of pitches because the coaches want this kid in the game. As he gets older his body is only used to throwing a baseball because that is all it knows. From the dynamic and ballistic movement of throwing problems could occur in that throwing arm or even somewhere else if this athlete doesn’t have the strength to get out of that movement pattern and balance the himself out. Think about filling a cup up with water. Eventually it will overflow unless you find a bigger cup. Playing multi sports or getting involved in a good strength training program is like grabbing a bigger cup.

Playing multiple sports can provide athletes with varied movement patterns and skills that they won’t get playing one sport. This can provide the athlete with a resilience to potential injury because they have more strength in different planes of motion, they have a more developed movement library, and therefore can handle more overall load than a single-sport athlete. One thing we find with pitchers who have specialized early on is that by the time they get to the high school level they have completely lost the capacity to jump. Their verticals are very low and they aren’t very good at decelerating (landing) on one leg. This is alarming because throwing is very dynamic and if they can’t decelerate that force with their lower body then their throwing arm is going to have to. Also, wouldn’t you want a pitcher to be able to produce a lot of power and force through their legs? This is why early sport specialization can actually atrophy the athletic development of an athlete. They have tools that are going unused or underdeveloped because they’re only doing what is required of their sport.

Getting away from the physical and into the mental I’m sure many know that one of the problems with early sport specialization is athletes getting burned out. At Force, we have had two high school seniors that specialized in soccer at a young age, but decided to stop their senior year of high school to pursue Olympic Weightlifting. Now I think that is really cool, but it doesn’t diminish the reality that specializing in one sport early on can lead to resenting it and quitting it later on.

My belief is that many kids are encouraged consciously or subconsciously by their parents that the only way to really be good at one sport is to only participate and train in that sport. I think this leads to burnout because the athlete thinks that it was ultimately not their decision to only play one sport in the first place. I also think that many athletes are curious about playing various sports but their stuck in the mental conditioning that they can’t be really good at their favorite if they play others, or they can’t be really good at multiple sports.

Burnout can also be caused from the increased risk of injury and stress resulted from playing one sport. If an athlete is always having aches and pains and has to constantly sit out it can be very mentally challenging to continue to enjoy the sport they once loved. If throwing a baseball or softball is what made you fall in love with that sport, imagine how much you would enjoy that sport if it hurt every time you thew a baseball or softball. 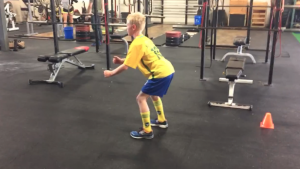 There are much better options for athletes who want to excel at one sport than to simply just specialize in that sport. As we just went over some of the problems with this approach I want to go over some alternatives that could be more conducive to the athletes mental and physical development.

I went over this a little bit already but participating in multiple sports can increase an athlete’s athletic and cognitive development. Being exposed to different movement patterns, different changes of speed and direction, and different skill tasks can increase the athlete’s development by just participating. A pitcher could learn to be more explosive on the mound if he or she played a little bit more basketball, a football player could learn a little bit more hand-eye coordination if they played more baseball, and a basketball player may learn to be tougher and play harder defense if they were involved in football. Playing multiple sports won’t lead to loss of skill in one sport but will aid in the development it takes to perform that skill better.

If by any means playing multiple sports is just too much to ask of an athlete another option would be to find a good strength and conditioning program. One that is going to challenge you while also increasing your strength, movement quality, speed, power, velocity, etc. I mentioned earlier about athletes being susceptible to injury by overuse. A good strength training program can combat these effects by getting an athlete strong in all planes of motions and at various levels of speed. You are simply adding more tools and bigger tools to an athlete’s tool box.

I wrote about this in an article about how to remain athletic as you age and the principle applies to youth and high school athletes as well. Not sure if anyone has noticed but kids are much more distracted by technology today than they were 10 or even 5 years ago. Athletes, and youth athletes especially, should use their free time playing more. Get off the phone, get off the video games and go outside and just play. A simple game of tag can go a long way in the physical development of a young athlete. When I was younger me and my friends would play backyard baseball pretty much everyday during the summer. So much so that one of my friend’s dad even mowed base paths in the back yard. Getting out and playing will not only increase an athlete’s motor skills, but it will also increase their social and cognitive skills as well. You will even see their overall sense of well being increase as well.

Early sport specialization isn’t a dumb theory. It makes a lot of sense. However, it might not be the best way to sustain an athletes long term development. Early sport specialization can lead to overuse injuries or burnout in which the athlete is no longer passionate about a sport they once were. This is caused by specializing too early on, and the plan that was developed to get them that college scholarship is now the same plan that caused the athlete’s love for the sport to drop.  We need to get out of the mindset that specializing in one sport is the only way to reach your full potential. It may work for some but there are many that it won’t work for. Being involved in multiple sports will not decrease the skill level of an athlete, but will increase the athletic development and capacity of an athlete. Lets give the kids options and let them find their own way rather than forcing them down one path. I think we will find healthier, more athletic and happy athletes.

An example of a drill we used in our youth speed camp to get the creative “juices” flowing. They had to pick a different way to cover 10 yards each time. Great way to build different movement patterns, motor skills, and cognitive and social skills.