Is speed something you can practice and get better at? Growing up, I’ve  always heard that speed was something you were born with, some people are naturally faster than others, and there isn’t a lot that you can do about it. I’m glad that I’ve learned and worked with athletes at a young age so I can see the giant improvements in their general athleticism that some would think they were initially “born with.”

So, how do you practice and become faster? Let’s assume that we’ve already spent time training and developing general physical characteristics, such as strength, stability, mobility, and a general understanding of how to move. Let’s assume we’ve already taken an athlete who has never trained before through a good solid 6 months of training with all the fundamentals so he or she is now ready to work on speed with minimal risk of injury. What are some things we can assess and practice to develop that faster athlete?

How do they jump?

These are some things that need to be assessed and addressed if someone wants to increase his or her performance. An athlete isn’t going to be able to put an adequate amount of force into the ground if they can’t first stabilize their body weight. Jumps are a great way to introduce an athlete to higher rates of force application and absorption without overriding their brains with too much information. Basic jumps like box jumps, broad jumps, and single-leg bounds, are great for the athlete to practice absorbing and producing force at higher rates to get them prepared for more complex tasks, like sprinting. We have an athlete who’s very strong and also pretty fast, but when she first came in, she couldn’t bend her knee when landing on one leg. She only knew how to bend through her hip when landing on all of her single-leg jumps. Now she gets adequate knee bend and doesn’t even have to think about it. To become faster with training, having an understanding of and demonstrating proper jump mechanics is a good foundation from which to build.

How do they accelerate?

This might appear to be a more loaded question than what I actually want to talk about. What I mean by how does an athlete accelerate is how do athletes demonstrate their ability to go from a stationary position to moving really fast? This can be assessed by a simple 10-yard sprint, various sorts of medicine ball throws, or reactive sprints. I think reactive sprints are the best, because the athlete can’t think about what he or she’s going to do next; they don’t even know which direction they’re going to sprint. This is a good way to assess the angles an athlete will naturally take to express acceleration. It’s closely related to what they’ll experience in sports.

When assessing the way athletes accelerate, we can assess what angles they naturally express to accelerate. From there, we can determine a lot of what they need to practice. Do they need to learn how to drop their center of gravity to push the ground in the right direction? Do they get so extended that they can’t bring their knees up to punch the ground with enough force in the correct direction? Are they so unstable that it takes them forever to “get going?” Do they look like “Sonic the hedgehog” when they run, because they have no idea how to coordinate their bodies effectively? These are all things that can tell us a lot about how athletes run.

Put the athlete in a position to succeed

Based on some previously described assessments, what does the athlete need? Once we determine their athletic needs, we put them in a position to succeed. We use drills that enforce the outcome we’re looking for and apply feedback so they can feel and have an understanding of how they can achieve that outcome. For example, if an athlete needs to work on getting his or her center of mass in a position to drive the ground effectively, we get them set up in a position where it’s easier to achieve that. A great drill is a half-kneeling start to an acceleration. This puts the athlete in an already low position where they have to drive the ground down and back to accelerate out. Once an athlete can understand and know what that feels like, he or she now has the tools to accomplish it more often. Once they perform a certain task with enough efficiency, then it’s more reasonable to have them progress to something a bit more advanced.

What are some general characteristics that will help most athletes?

I want to discuss what most athletes suck at so they have a few things they can continue to practice in order to perform faster.

This may sound vague, but a lot of athletes lack an understanding and the ability to push into the ground. Effectively pushing into the ground is the result of applying adequate force in the right direction to get you where you want to go. What we typically see is athletes who want to pull away from the ground to get where they’re going. This usually shows up when an athlete gets overly extended and isn’t able to get into a position to properly push into the ground. 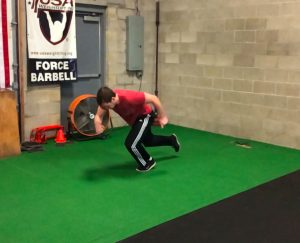 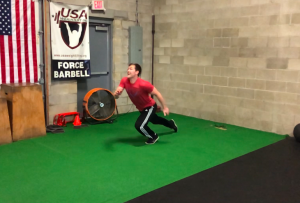 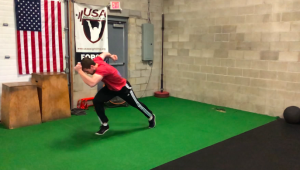 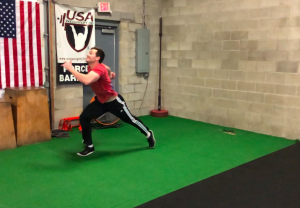 You can see the photos on the left compared to the right offer a much better push into the ground, and results in much better mechanics to get you where you want to be going.

2.) The ability to “drop” their center of gravity

Commonly known as “get low,” we don’t want an athlete to get low for the sake of getting low; we want the athlete to shift his or her center of mass in a way that’s going to put them in an optimal position to accelerate. What we often see is athletes trying to accelerate too high, which doesn’t put them in a good position to apply force to get them moving fast in the direction they want to go. This same concept can be applied in relation to change-of-direction activities. The center of mass of the system needs to be managed in a way that sets the athlete up to where he or she can be fast.

The plyo-step is a good example at managing someone’s center of mass to put them in a position to optimally accelerate forward.

This is not a good example of managing center of mass to accelerate forward.

The hip turn is a good example at how an athlete can shift hips and center of mass to get them in a position to go where they want fast. In this case, backwards.

This video should be obvious how mechanics aren’t optimized like the video above. Center of mass doesn’t drop and hips don’t turn in direction of travel.

The directional step is a good example of shifting center of mass in a way to accelerate laterally.

To be fast, an athlete needs to optimally flex his or her hips. What this means is that they need to be able to bring their knee up high from a more neutral pelvis position. If an athlete just anteriorly tilts his or her pelvis, this creates more hip flexion, while their femur goes nowhere. The acetabulum just moved over the front side of the femur. What we want to see is an athlete being able to keep a neutral, stable position of his or her pelvis and then be able to bring the knee up without compensating in other areas. If an athlete can bring his or her knee up in this way, that athlete can then apply a maximum amount of force into the ground from their leg. 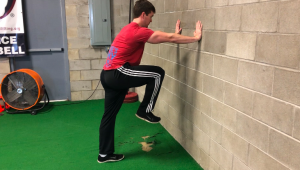 This is an example of adequate amounts of knee flexion an athlete should be able to get in to. 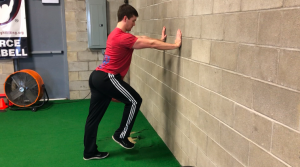 This is an example of an athlete getting too much extension of the low back, which causes the femur to not be able to get to optimal ranges of flexion for sprinting.

For athletes looking to open up some degrees of hip flexion, this wall breathing is a good one. Maintain a position of ribs and pelvis facing each other, inhale through nose, and exhale through pursed lips. Inhale and exhale should last as long as possible. Should feels ribs draw down and back on exhale, and fill up the back of the ribs on inhale. This should open up some anti-extension and knee flexion competency.

This is a simple concept, but crucial to understand. Being able to move faster doesn’t mean the athlete has to simply work harder. In most cases, he or she needs to move more freely. Building off the “Sonic the hedgehog” analogy earlier, a sprint should look fluid, not brutal. If an athlete is trying to work really hard to be fast, chances are he or she isn’t moving efficiently. Speedy movement comes from using the right muscles at the right time. Too much muscle tone results in restricted motion. The next time you’re doing speed-related work, focus on doing some of the basics well and work on moving smarter, not harder. If you video yourself sprinting and see that your face looks like you’ve been hit by a battering ram, chances are you’re holding excessive amounts of muscle tone.

As mentioned, people have trouble moving freely because they hold muscle tone in places the prevents certain movement. This breathing drill on the wall helps open up movement in all planes of motion. This can help get rotation of the thorax that an athlete might typically not be able to get. This won’t definitely change positions, but will open up competency in areas that an athlete wants in order to be fast. Nothing can substitute for practicing running fast for an athlete who wants to be fast, but some times they need a little more competency in patterns they haven’t been exposed to.

If you want to be Usain Bolt, get born with the exact same genes in the exact same environment as Usain Bolt. However, if you want to be a faster version of yourself, it takes practice. It’s important to know your weaknesses so you’ll know what to practice and how to apply what you’ve practiced. You may not be able to practice being Usain Bolt, but you can practice being an upgraded version of yourself. Usain Bolt still had to experience a lot of smart practice to be where he’s at now.