Most strength athletes spend the bulk of their training dialing-in the lifts that are specific to their sport. A powerlifter will focus on the bench press, back squat, and deadlift, and different variations of those lifts. A weightlifter will spend most of his or her time working on the snatch and clean and jerk, and different variations of those lifts. The rest of a strength athlete’s training will be focused on assistance exercises, conditioning, stretching/mobility, and recovery. I want to focus on the athlete’s assistance exercises and how they might benefit more from them. If only a small amount of time is being given to assistance exercises, it’s important to make the most out of them so the athlete will benefit. I’m willing to say if you aren’t focused on making your assistance exercises effective, then it would probably be best off just dropping that portion of your training so as to not waste your time.

I believe it’s easy to miss the mark on what type of assistance exercises you should be doing to gain the most benefit. Every athlete is going to be different, but I’m willing to say, based on my experience, the next five exercises will benefit most strength athletes.

Quick note: These exercises aren’t variations that are specific to competition lifts. They’re general exercises that are devoted to making an athlete stronger in key areas.

The key in the glute-ham raise is to not lead with the lower back. Notice how in the second video the lower back is arching super hard to raise the torso. We are looking to keep a more neutral pelvis and low back to get the most out of the glutes and hamstrings.

This is most likely an exercise that everyone has done at some point. I made a note: “heavy” at the top, because most people do 1-arm rows with lighter weight and more reps. The 1-arm row can be used as a great developer of the upper back, not just from a muscle-growth standpoint, but from a strength standpoint, as well. It’s important to not only perform the movement effectively, but to also use heavy enough weight to get adequate stimulus. If you want to get your upper back a heck of a lot stronger, then it might be reasonable to leave the slow, “mind-muscle connection” 1-arm rows for another day and start letting them rip with heavy weight. I also suggest doing these for sets of 5, rather than the typical 8-12 reps, to get more of a strength benefit.

Box jumps might be an uncommon assistance exercise, but they can be very useful in developing a strength athlete outside the competition lifts. Most strength athletes are pretty good at moving really heavy weight really slowly. Or, for the weightlifter, moving moderate amounts of weight moderately fast. An example of the former might be a really heavy back squat max, and an example of the latter would be a max snatch or clean and jerk. Most strength athletes don’t spend lot of time moving really light weight really, really fast. Box jumps are something that make an athlete do just that—produce force very, very rapidly. This isn’t something super specific to the sports of weightlifting or powerlifting. It develops neurological and physiological deficiencies in a strength athlete that can make their lifts go up. Most of the time, work should be done to produce force specific to the sport, but spending some additional time working on producing force very quickly can enhance an athlete’s neurological ability to use their fast-twitch fibers, which can result in bigger lifts on the platform.

A strength athlete needs a strong core, because he or she spends a lot of time lifting heavy weight where the muscles of the core are heavily involved. The weighted plank is a great go-to for developing the core muscles, because it addresses a little bit more specificity for strength athletes. Strength athletes would be better served doing planks for less time with substantial weight on their back than spending time doing planks for one minute or longer. Because strength athletes spend so much time under heavy loads, the best way to train their core is to train it in isolation with heavy weight. I’m not talking about loading 300 lbs. on a person’s back and having them hold a plank, but 50 lbs. is plenty when the muscles of the core don’t have as much help from the bigger surrounding muscles. 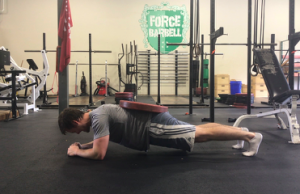 For some athletes, specifically weightlifters, this might not be considered an assistance exercise, but I’m throwing it in here because it isn’t a competition lift and is such a great lift for anyone to do once they learn to do it well. The front squat is so great, because it helps to develop so many things at once. It’s great for increasing mobility in the shoulder; it’s great for gaining leg strength; and there’s a great stability component, as well, because the bar is loaded in front of the center of gravity. If an athlete has gotten really strong in the front squat, you know you have developed multiple areas at once in that athlete. There are a lot of powerlifters who can put 500 lbs. on their back and squat, no problem. But they can’t front squat even half of that. To me, that is a problem, and it points out that there are many areas where that athlete can get stronger to become a better lifter. The front squat is a great test to see where a lifter might have certain deficiencies and is a great way to address those deficiencies. As a strength athlete, you need to be able to front squat at least 70% of your best back squat or you’re probably limiting yourself.

How did I come up with this list? I simply looked at where most strength athletes are weak. They’re weak in their hamstrings and glutes, upper back, and core. They don’t spend any time doing any light weight explosive activity. These are really good exercises that can individually address all of these areas. That’s how I came up with this list. However, the list could easily change, depending on an athlete, but what’s most important about this list is that it was made with the intention of addressing weaknesses. Most strength athletes love to continue to do things that they’re really strong at and don’t like spending any time doing things they suck at. If you really want to be a strong and sustainable athlete, start doing more of the things you suck at.