So you want to be a strength coach, huh?

As a very young strength and conditioning coach in the private industry and some brief time as an intern in the college strength and conditioning industry, I feel like I can share some perspective on this issue. I was one, like many, who started studying exercise science in college and wanted to be a college strength and conditioning coach because it was something that sounded really cool to do. I grew up playing sports since the age of about 6 all the way through high school. Sports were what my life revolved around so it only made since that I would continue to pursue sports. Strength coaches seemed like real “rah-rah!” guys and the weight room always seemed like a fun atmosphere, so what better way to make a living than to be in that kind of environment!

The tables turned when I found out what it really meant to be a strength and conditioning coach. How many hours are devoted each week, how repetitive the job becomes, how exhausting it can be waking up at 4:30am getting ready to do the EXACT same thing you did the day before. I recently just saw a fantastic quote by Danny Camargo, who is an international level USA Weightlifting coach, which highlights the life of a strength coach perfectly. He said, “greatness is hours of exhaustion, sometimes boredom from routine, with brief moments of sheer excitement and glory. 90% work, 10% victory.”

The life of a strength coach all of the sudden became clear to me that it is not all “rah-rah-rah,” excitement, and having players hit a new one-rep max. back squat everyday. It also became clear that athletes don’t love the strength coach as much as I assumed. I thought, “all athletes have to love the strength coach, they’re like the big brother or gym bro in the room.” However, the realness is that some of the athletes are not a fan of you most of the time. Not because of your personality, or your abilities as a coach, but because they have to see you at 6am everyday during the summer when they would rather be sleeping or going out with their friends that previous night. The really cool YouTube videos of what goes on at really big college weight rooms around the country is not an accurate description of what it means to be a strength coach. Those videos don’t show the extra hours being put in on Friday evenings developing the next training programs when you would much rather be having a beer. Those videos don’t show all the hours away from your friends and loved ones. Oh yeah, you want a social life? That is non-existent as a strength coach. Your life is spent at the gym or in the weight room. It is spent dealing with athletes who don’t at all want to deal with you. It is spent working 12 hour days with only some fruit to fuel you for the entire day. It is spent tireless and exhausted, but knowing you would rather be suffering doing this than anything else in the world. That is why strength coaches do what they do.

So, you still think you want to be a strength coach? 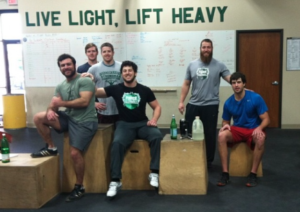