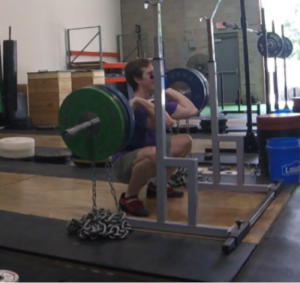 d States are still doing the same boring old shit. The thing is, unless you’re an Olympian that same boring old shit works, and for the most part, even for the Olympians as well. In this article I want to simply go over why weightlifters would want to use chains, and why that would be a beneficial thing to do.

I’m assuming most people reading this already have a good sense of what adding chains to the lift does for performance, but I will quickly go over it. Since we will be mostly talking about the squat with weightlifters I’ll use that for example. Adding chains to the bar on a squat gradually increases the load as you move from the bottom of the squat (chains on floor = no load) to the top (top = heaviest, because all chain links are off the floor). What this means, is that your simply maximizing your force output into the ground. You simply don’t have to put maximal amount of force into the ground throughout the whole range of motion of a normal squat, because as your leverage improves towards the top of the squat you simply don’t have to “drive” into the ground as hard to stand up with the weight. Adding chains removes the benefit of your leverage improving, because the weight is gradually increasing as your leverage improves, making your nervous system work harder to increase the rate of force development.

I’m going to hit on three simple things as to why weightlifters should use chains.

Assuming that you already have some solid base levels of strength built, using chains can only provide more stimulus for growth. Using chains can be a great way to develop a little bit more speed out of your lift. How many times have you seen someone warming up to their heavy sets moving the bar super slow at 60-70% of their 1 RM. Throw some chains on the bar, don’t tell the athlete anything, and that will change pretty quickly. Also, how many athletes do you know whose 85% lift and 100% lift look almost identical. This tells me that their nervous system isn’t quite efficient at producing that higher rate of force development that you want to see out of all athletes. Add some chains in the mix to their normal squatting and that could quickly change. Again, any athlete out there can reap the benefits of accommodating resistance that chains provide. It isn’t rocket science, but it adds a little bit more variability or what I would like to call “spice,” in the mix. To close on this point, just get strong. If you don’t have chains don’t worry about it. Get stronger before you get fancy.

I’ve sort of already hit on this, but adding chains to the squat for weightlifters can simply be a different way to train the nervous system. Most weightlifters are used to the same “squat super heavy” routine. Aka do heavy singles, do more heavy singles….do more heavy singles…and, “oh, just done with a competition, squat with more volume now.” There isn’t much variability in this type of squat program, and it is because this type of program works. So much shit out there works, which is why it blows my mind when everybody is constantly looking for the newest and coolest way of doing things. Stick to the same old script. However, using chains can be a great way to keep the nervous system fresh and efficient. Weightlifters usually squat to developtheir absolute strength and  do box jumps to develop a little bit more of a speed component. Squatting with chains is a great way to develop the sweet spot right their in the middle. It trains the nervous system to develop force at a fast rate. I like to use the on the minute method when squatting with chains to train the nervous system a bit more. Not only does squatting with chains trains the body neurologically to create a lot of force fast, but under a little bit of a fatigued state the nervous system will get even more efficient at recruiting those motor units to do work. I’m not talking a crossfit type model where you are about to be on the ground passed out, but just a few squats on the minute for 10 minutes will do the trick.

Last point I want to hit on his how chains can help a weightlifter squat consistently without taking a huge toll on the body. If you take a look at a lot of weightlifters that squat heavy (heavy, I mean volume or intensity) consistently they get pretty beat up. Squatting with chains can be a great way for weightlifters to keep the consistent squat method, but not get the wear and tear that it causes…mostly to the knees. When you look at the squat, back squat or front squat, the body is at the most mechanical disadvantage at the bottom. The bottom of the squat is where the joints, ligaments, and surrounding tissue are going to get beat up the most. Squatting with chains limits that load at the bottom. Say, 70% of your 1 RM back squat is 100kg. With chains it will stay at 100kg/220lbs at the bottom, but at the top it could be anywhere from 136ish kg/300lbs to 154ish kg/340lbs. So, there is some great work still being done by the body there. I recently just finished a training program where I was squatting heavy 4 days a week before I did any sort of Olympic lifting. 2 days with chains, 2 days without. I was hesitant going into this program because my knees were already giving me some trouble. By the end of the 4-week cycle, not only did my knees feel better, but I felt a lot stronger than before I went into the program. Even set a few PR’s in the process. Using the chains on squats just a couple of days a week, limited the amount of load on my knees at the bottom, while at the same time still giving me the ability to go pretty heavy. If you are experiencing some slight knee problems, but don’t want to stop squatting. Try adding chains to your squats a few days a week for a month straight and see how you feel at the end. Remember, the percentage of your 1RM on the bar will be lower.

A few closing remarks…What I was not trying to get out of this article was for every weightlifter in the U.S. to go squat with chains right away because it is the most glorious training secret of all time. It’s not a secret; it’s not a shortcut. It’s simply a way to train with a little bit more variety, and could be a way to keep the body in good physical shape. I simply wanted to inform you why using chains or any accommodating resistance have benefit, and why weightlifters could see some potential in using them. What encouraged me to write this article was because I simply don’t think weightlifters have been informed much at all about the use of chains. I believe they think it is just some powerlifting thing, and are unsure of the science behind it. Chains can be beneficial for any sort of athlete. But, like I said before there are no shortcuts. GET STRONG BEFORE YOU GET FANCY. Stick to the simplicity.

If anybody thinks there are some crucial points that I was wrong about, or that are missing from this article please feel free to contact me. Email is: Justin@ForceBarbell.com. I would be more than happy to discuss.