I first met Dennis during my time at Purdue University (BOILER UP!), and was pleasantly surprised when he moved to Fishers and looked me up for a place to train this off-season.  Fishers is a great place to live, but I was somewhat perplexed as to why he chose to relocate to here since I knew he was still playing ball in Philly. 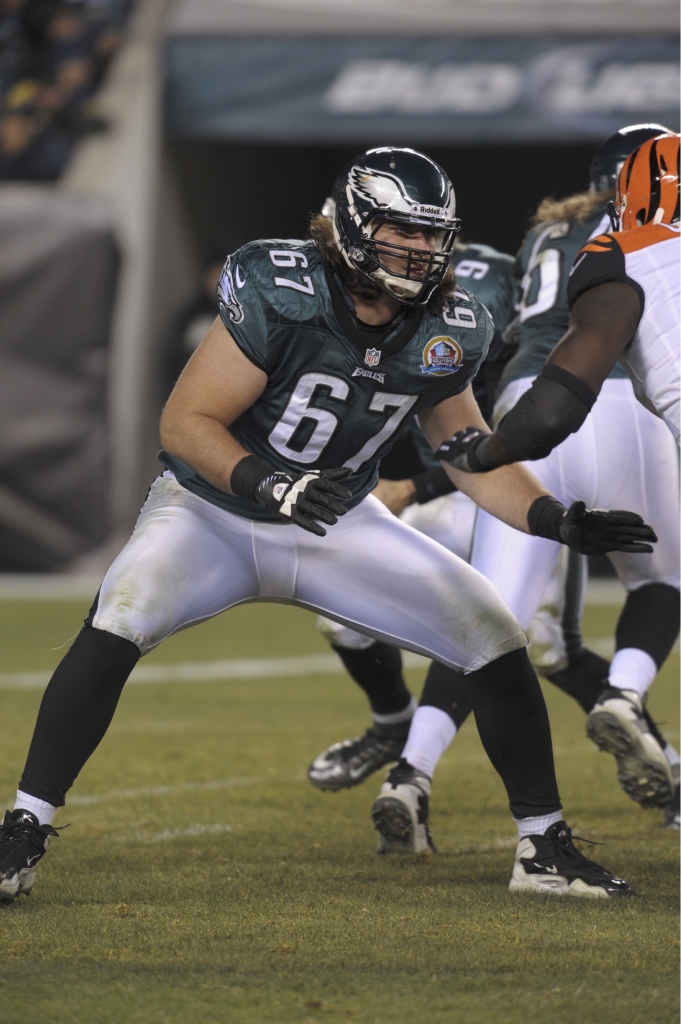 When I inquired, he stated simply, “My wife if from Kentucky.”

…Good answer, big fella.  I realized shortly after that he, like me, is now a father and that Fishers is a nice middle ground between his parents in Chicagoland and in-laws in Kentucky.

It’s been great to catch up with Dennis this off-season, and be able to coach him up once again in a different setting at a different point in each of our careers.  It has been a good opportunity to reflect and see how far we have both come in just a few short years, both in life and professionally.

Here is a little more about Dennis, straight from the (work)horse’s mouth.

Tyler Miller:  Tell us a little about Dennis Kelly.

DK:  I am a professional football player for the Philadelphia Eagles. I currently live in Fishers with my wife, Jerianna, and daughter, Eden. I have been playing for 4 seasons now and I am training to improve my whole game to become as successful as I can be in the National Football League.

TM:  Tell us a little more about your football career to this point. How’d you get started, where have you been, etc?

I was then offered a greyshirt to Purdue University. I was able to put on 30 pounds of muscle from the fall my senior year in high school to training camp the following fall. I was offered a full scholarship because of my gains and in turn ended up playing 5 games my true freshman year. I was then a 3 year starter earning honorable mention all conference twice and academic all conference twice. I was the team captain my senior year and a 2 time Offensive MVP.

I was then drafted by the Philadelphia Eagles in the 5th round of the 2012 draft. I started 10 games my rookie year before having back surgery at the beginning of the 2013 season. I have played in 30 games in my 4 year career and am now on my third coach with the same team.

TM:  How has training at Force Barbell helped you?

DK:  I started training at Force Barbell in January of 2016 and it has helped me advance my game tremendously, even in the short time I have been there. In 2.5 months, I was able to put on 18 pounds of muscle. I have been able to get in the best shape of my career and that is because of how things are done at Force.

TM:  I think a lot of people wonder what really goes into getting ready for an NFL season.  You’ve been training here for a few months and leave for Philly in April, but the NFL Pre-season doesn’t start until August.  What does the rest of the NFL off-season look like once you get back to Eagles headquarters?

DK:  The program I start in April is special this year because the Eagles have a new head coach and we are allowed to have an extra minicamp during our time in Philadelphia. The first few weeks consists of working out as a team and going through meetings detailing the scheme. Teams with new coaches will then have a 3 day mini camp so the coaching staff can see how the current players have taken to the new scheme.

There are then a handful of weeks of more working out and meeting while gradually adding more on field practice time. It is a way for coaches to put in all the new ideas and plays that they may have come up with during the time off in the winter. Add the draft in all of that and you end up having the get the team ready to hit to ground running when training camp starts.

TM:  What advice do you have for a young athlete looking to follow in your footsteps?

DK:  For those who are looking to follow in my footsteps and become a professional football player is to follow your dreams and believe you can do it. I was just a kid when I realized that I wanted to play in the NFL, and because of that I worked my tail off to accomplish what I wanted to.

With that comes some sacrifice, but it has been very rewarding having the ability to say that I have instead of saying I could have. I believed what the coaches and my role models told me and I had fun playing this game.

It has been very good to me and my family, and I have enjoyed my time living my dream.